March 2, 2007 saw the beginning of a North-East of England club night By Royal Appointment aka B.R.A. ran by Iain Kirk (Jack! Who?) & Dylan Hawick. With a goal firmly set on discovering local, showcasing national and introducing worldwide talent on a regular basis to the somewhat stale clubbing scene in our hometown Sunderland, Tyne & Wear. Accompanying a respected House based night called Ward10, we had an ethos to play electronic tracks from around the world and fill a void for local clubbers wanting to hear underground/non-commercial dance music. B.R.A. gained a loyal local following and was noticed nationally in the press on a number of occasions with regard to future talents that were booked.

The escalating reputation of B.R.A. events lead to an unmissable opportunity to join a dream line-up @ LUBE: in nearby Newcastle-Upon-Tyne. It was ran by local duo Nick Adams & Pete Robinson (Bigger Than Jesus) together with Michael Sweeney which promised to be nothing but the best in underground techno, tech house and minimal. The B.R.A. boys were given the faith of hosting the second room with the honour of joining 3 of their favourite musical inspirations and internationally known Thomas Schumacher, Luca Bacchetti & Perc.

Circumstances changed and unfortunately B.R.A. came to an end. Soon after in March 2010 Iain decided to embark on a new project with fellow music junky, school friend and producer Steve Omac. An idea that was thought up a year before, an innovative new podcast based mix series called Death Techno. From the outset, the idea was to create a unique brand that covered dark/deep/twisted minimal/techno and brought like minded individuals together through the music, promoting DJing talent and producers alike.

The worldwide following it has already acquired (see stats below) partnered with B.R.A.’s solid history saw Death Techno host The Gallery at super club Es Paradis in Ibiza, August 2010. The Main Room was headlined by Drum & Bass titans Dillinja (Valve) & Logistics (Hospital) with the event put together by friends Calcutta & Grenade based in Newcastle. They’ve been making waves on the white isle these last few seasons, pioneering a new scene with great support from those in the industry.

June 2011 has brought another landmark to the history of Death Techno. Always thinking of new ideas and sculpting our own path, we agreed a sponsorship with Big Dirty Cables ‘Custom cables for TV & Audio Professionals’ in London. We admire their ethic with all round high quality products and are now our choice for gigs and audio set-ups while promoting to our worldwide audience by offering prizes through competitions to our fans and listeners.

Since starting the podcast in March 2010 there has been over 72,000 downloads on iTunes via podOmatic alone, not too mention SoundCloud, Mixcloud and high quality mp3 downloads too. Continuing to grow and staying true to the initial idea is not taken lightly, with more potential opportunities arising all the time.

Roll on Sept, with things going smoothly, the chance to support Native in Newcastle at The Globe with huge artist and headliner Jon O’Bir. It let a few of the local guys get together in a wicked homely venue for a party which included William Welt, Pete Weasel, Daavneeq & John Hepplewhite. Leading up to the night, local dance collective Bunker Dance caught wind and asked to come along and record the whole night to be broadcast a week later on Sunderland’s own radio station 107 Spark FM. 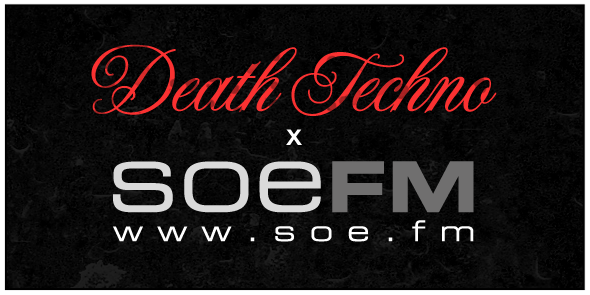 At the beginning of a new year, January 2012 presented a fantastic opportunity for a unique partnership. Death Techno were asked by internet radio station soe.fm to broadcast their mixes on its airwaves first, updating the format into a regular bi-weekly show. Based in Germany, they are a passionate family that love what they do, where high quality and standards are essential. They’ve featured sets by majorly influential electronic artists from around the world. 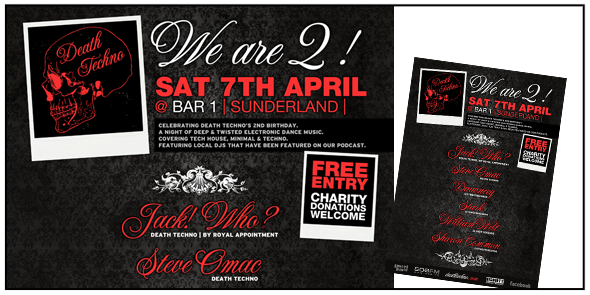 Celebrating their 2nd birthday in March 2012, Iain decided to throw a party, having free entry with donations going to a local charity featuring local talent that have been involved with the podcast. 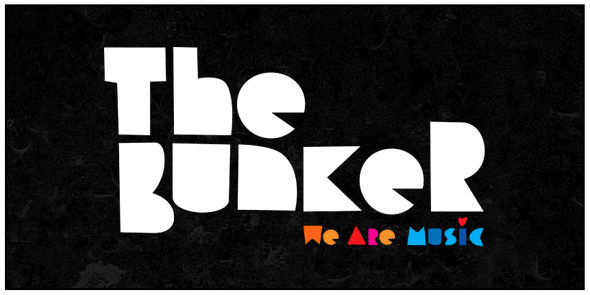 The Bunker is an organisation at the centre of music and arts in Sunderland, constantly using music as a tool to help educate and improve many lives whilst supporting the community. They also provide rehearsal facilities and professional recordings studios paving the way for national and internationally acclaimed bands like Field Music, The Futureheads, Frankie & The Heartstrings with Hyde & Beast more recently. 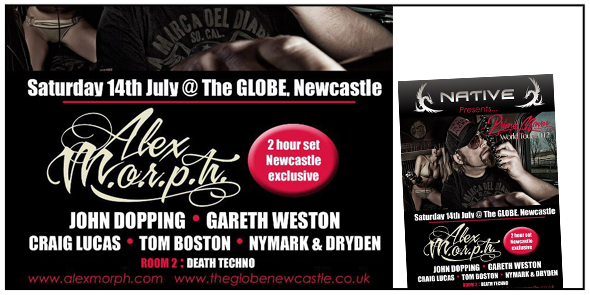 July 2012 brought a return to Native, again in Newcastle, this time to play with the legendary Alex M.O.R.P.H for his “Prime Mover” Album World Tour. He has worked with artists like Faithless, Paul van Dyk and Armin van Buuren.

“After receiving many plaudits in DJMag, Mixmag and local newspapers, I decided to end our club event B.R.A. after 2.5 years. After a little break, I felt a progression was necessary but I still wanted to be DJ’ing and promoting good underground music as there was so much more I wanted to achieve. The idea of a podcast came up in early 2009 and was always on my to-do list, wishing to create a fresh brand that’s true to the style of music I like to mix. All responses to Death Techno mixes so far have been super supportive and it’s quickly reaching a worldwide audience.

I really hope people enjoy listening to the mixes as well as discovering new music as much as I do and go out of their way to be involved in something I’m working extremely hard on with forward thinking ideas.

Death Techno will bring you quality underground mixes from all corners of the globe by hand picked DJs to established producers that have been personally asked to create a Dark/Deep – Minimal/Techno mix or have been selected specifically for their style and quality.

You can subscribe in the iTunes Store or follow the SoundCloud page. Also, keep an ear to the ground for the Special Mix Series too which will only be published on our SoundCloud.

Thanks for your time, enjoy the music, check out the mp3 archive and feel free to get in touch.”