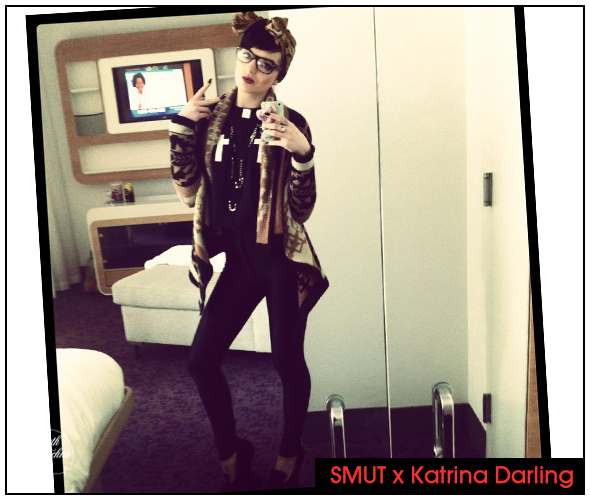 Sascha and friends at London based SMUT Clothing always have their finger on the pulse. Now being sported by another rising talent from Sunderland, friend, model and burlesque performer Katrina Darling in the appropriately named “Naughty Vicar T-shirt” which is available from their online store. This photo was taken before her appearance on Entertainment Tonight in the US after a very successful tour, which received attention and interest from the legendary Playboy brand.

To let you into a little secret, she also has royal connections being second cousin of the Duchess of Cambridge, Kate Middleton. Part of her burlesque act is called “God Save the Queen” to play on the family ties. A little further below are some of our favourite photos of Katrina showcasing her versatility and awesome style.

We would like to show our support and best wishes to Katrina and SMUT.

Keep up to date…

We’ve been a fan and follower of London based SMUT Clothing for over 4 years now. Everything from the brand, blog, clothing, models and their general way of life is unique and naughty. The feeling has been reciprocated by the main man Sascha digging mixes from myself and our podcast since the beginning, even dropping them at after-parties I’m told!

In recent months, much to our elation, we’ve seen photoshoots pop up of friend and model Ellis Cooper rocking SMUT gear, who hails from our hometown Sunderland. Ellis has just moved to London and is currently signed with Girl Management which is ran by Lucy Pinder, who looks after many top models like Vikki Blows.

We are over the moon to see this collaboration happening and would like to show our support!

Keep up to date…