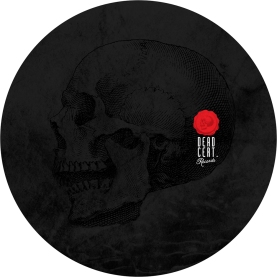 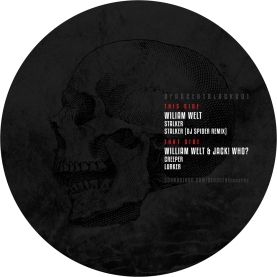 After much planning and patience DEAD CERT. makes a move into its first vinyl only release that features original material from label bosses William Welt & Jack! Who? along with a freaky remix from New York vinyl head DJ Spider of Plan B Recordings and Berlin’s enigmatic Killekill.

“Stalker” is a dark and twisted monster, that broods from the bubbling bottom end. Added to the tension are metallic sheens and a sinister, yet dreamy atmosphere that pushes forward with a dirty groove making it a diverse production to suit different moods.

> 01. What was the thinking behind this track and did you achieve what you set out?
The track started with the bass line and a “Rip and Run” concept where I ripped samples from magazine cover CD’s and Remix Packs made publicly available online. I then used destructive effects and processes that worked on each sample until it was unrecognisable compared to its starting point. This often involved rendering audio after it had been washed in effects and chopping out the segments or one shots that I liked, then repeating the process until I was satisfied with each finished sound.

> 02. What tips and advice can you share to any producers on shaping their own sound?
I’m by no means an established producer and I think any advice I give should be taken with a pinch of salt, as I work with limited resources and quite often my production techniques are a thorough, but at times long winded and time consuming. The best advice I would give is play your music to people who you trust to be honest. It’s nice to get compliments and be told something is good, but negative feedback from impartial third parties can sometimes be the most useful. Even if it’s just food for thought and after thinking you like the original sound, but it never hurts to question your ideas and listen to others.

> 03. What is your go to track at the moment by another artist?
I listen to a wide variety of music but one of my go to artists is Suade who most people will recognise from his collaboration with Magda. They made a track called “Fixation” which came out on her Items & Things label she runs with Marc Houle and Troy Pierce. Suade is a modest man and a genuine Dr. of Techno after completing a doctorate degree in music with a thesis that specialised in Techno. Suade spent a lot of time helping me develop my sound and production ideas when I first started making music and I owe him a lot for the help he has so selflessly given.

Other more recognisable artists would include Audio Injection / Truncate as he has a dark and dancefloor focused sound, which is produced with razor sharp precision and a thick richness. He has the skill of making a little sound a lot with many of his tracks consisting of just a few well produced sounds. My tracks aren’t usually as stripped back or precise as his, but that’s why I look up to him and hope on day to equal his production skills. Audio Injection did an early remix for our DEAD CERT. Records and it was an honour to have him feature on the label.

Pre-Order the DEADCERTBLACK001 12″ at Juno Records